History of the Saxophone 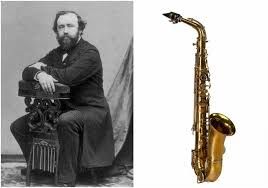 The story of the saxophone is best understood by taking a look at its inventor  Adolphe  Sax. The son of Belgium’s appointed chief instrument maker, Adolphe would learn his father’s craft and quickly surpass him in both skill and vision. At age fifteen, he fabricated a clarinet and two flutes out of ivory, a feat previously deemed near impossible. By the age of twenty, he had created a new fingering system for the clarinet and reinvented the bass clarinet, transforming it from an awkward derivative of the clarinet into the regal and elegant woodwind instrument it is today. He wasn’t limited to woodwinds and is actually credited by many as the inventor of the modern trumpet, having been the first to successfully fuse piston valves into what we now call bugles. Adolphe wasn’t just an engineer; he was also a master instrumentalist. Trained at some of Europe’s finest conservatories, he could play, and play well, virtually every wind instrument of the time.

Being the visionary he had an idea to create a completely new instrument. This instrument would combine the power of a brass instrument with the subtleties of a woodwind instrument and the facility of a stringed instrument. After much experimentation, he had his first working model in 1841, which he called the bass horn. It wasn’t until a review of his new instrument in the French paper Journal for  Debates, however, that the name le saxophone or saxophone came about. In 1846, Adolphe Sax won two patents for his designs: One for a set of saxophones intended for the orchestra and the other for a set of saxophones intended for military bands. Each set consisted of a range of sizes from the small sopranino saxophone to the huge subcontrabass saxophone. These two patents represented Adolphe’s two dreams for the saxophone.

This was a very important step for the saxophone because, through military bands, the saxophone would become a remarkable new image and sound that could be seen and heard around the globe. It was through these bands that the saxophone made its way to New Orleans and became a key component in the formation of early jazz. Recreate a legendary guitar with this wonderfully detailed LEGO Ideas build-and-display model (21329) of a 1970s Fender Stratocaster guitar and a buildable Fender 65 Princeton Reverb amplifier
The guitar features a posable whammy bar, pickup switch and tuning pegs, six strings, Fender logo stickers, and a textile strap. The bricks included let you build the guitar in red or black
The amplifier has removable panels for easy viewing of the motherboard, reverb tank, speaker and otherinterior details, logo stickers, plus connecting rubber cables for the guitar and footswitch
Includes a foldable display stand for the guitar, model-scale guitar picks in 4 colors, plus a sticker of the Fender logo built from LEGO bricks to put on your real guitar, amp or wherever you want
Guitar measures over 14 in. (36 cm) long, 4 in. (11 cm) wide and 1 in. (3 cm) deep. This LEGO display model makes a cool gift for guitar players, music lovers and Fender Stratocaster guitar fans Rainbow Joe and Me A time-travelling building project for adults – This LEGO Architecture model (21058) lets you experience how the Great Pyramid of Giza and its surrounding area might have looked in ancient times
Cross-section model – Lift off the outer shell to reveal the stone-moving system that may have been used during construction. View from the back to see the King’s and Queen’s Chambers and main tunnels
Detailed landscape – A section of the Nile river with 2 LEGO brick versions of feluccas (ancient boats), 2 small pyramids, 2 mortuary temples, Sphinx statues, a workers’ village and an obelisk
Gift idea – Treat yourself or give this building set to a friend or family member who has visited or dreams of visiting the Great Pyramid or is simply a lover of architecture, history and travel
Build, display and connect – Measuring over 8 in. (20 cm) high, 13.5 in. (35cm) wide and 12.5 in. (32 cm) deep, this model can be connected to a second model (sold separately) to complete the pyramid
Target genderunisex

The Circle of Fifths: visual tools for musicians History of the Saxophone A.I